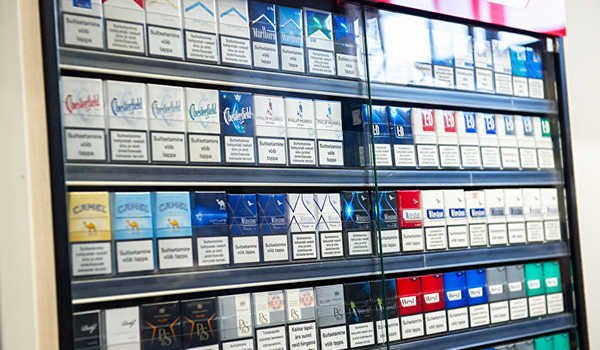 Cigarette display is the decoration of shop windows, areas near cash registers and special shelves in supermarkets by placing cigarettes against a bright background in frames, cases and panels. The purpose or result, or likely result of cigarette displays is to promote the tobacco sale or consumption directly or indirectly.

Special equipment is used at least by 77% of points of sale[1]. Most often, the points of sale are located near schools[2], universities and bus-stops. Experts on tobacco control say that cigarette displays are primarily aimed at children, young people and those who quitted or are trying to quit[3]. Placing cigarettes at children eye level, along with popular youth products such as sweets or magazines, creates social tolerance for smoking, and the use of bright design solutions leads young people to the idea that smoking is not only acceptable but also fashionable. The mechanism of the display works as a reminder for people intending to quit. Children who see cigarettes in bright shop windows are 64% more likely to start smoking[4], and 38% of smokers who try to quit agree that the presence of tobacco products in shop windows causes cravings for smoking[5].

In 2009, the draft law №5164 “On amendments to certain legislative acts of Ukraine (regarding a ban on advertising, sponsorship and promotion of tobacco products)” was registered[8]; this draft law was important because it completely prohibited any forms of direct and indirect incentives, particularly directly at the tobacco products points of sale. At all stages of the legislative process, lobbyists have tried to prevent the implementation of the ban on the cigarette sales promotion in various ways, ranging from “spamming,” using numerous amendments, to falsifying the already voted draft law and trying to influence high-ranking officials. However, the law has been approved.

Pretending that the tobacco products display, as a marketing tool, is not directly stated in the law, the tobacco lobbyists managed to succeed in blocking the implementation of the cigarettes promotion ban. The tobacco companies argue that the display is a shop window decoration and/or provide the consumer with product information, not advertising. To bridge the existing legislative gap, the draft law №4030a[9] was registered in July 2016. This draft law provides for a total ban on the visible placement of cigarette packs at the points of sale. The draft law has been approved by WHO[10], the World Bank, the European coalition of “Smoke Free Partnership”[11] and the Reanimation Package of Reforms Coalition organizations[12]. However, more than two years have passed since the draft law was registered, and it was put on the agenda of a plenary session of the Verkhovna Rada. Then, for 8 months, the draft law was not put to vote because it was not included in the upper list of the agenda. Only on May 14, 2019, the draft law was put to vote, but MPs did not give enough votes to support it in the first reading.

In an attempt to influence public opinion and the position of the so-called “policymakers”, tobacco lobbyists are actively disseminating in the media untrue information about the law №4030a. It is alleged that the ban on cigarette display will hurt the economy and small businesses[13], increase illegal trade, violate consumer rights, and it will not affect the prevalence of smoking[14]. These myths are obviously manipulative and refuted by numerous researches and practices of other countries. The information campaign against the display ban began almost immediately after the draft law registration in 2016 and especially increased when this draft law was on the agenda of the Verkhovna Rada plenary sessions.

The most aggressive information campaign against the draft law №4030a was launched by “National Retail Organization” (NORT) and its head Yurii Bondarev, together with his deputy Mykola Ganul, as well as People’s Deputy assistant Marian Zablotskyi, former Deputy Minister of Economic Development and Trade of Ukraine Maksym Nefyodov, American Chamber of Commerce and Association of Ukrainian Cities. Promoted materials appeared in the top Ukrainian media and on Facebook. NORT, the Association of Ukrainian Cities and the American Chamber of Commerce also sent a statement against the draft law to the authorities. Maksym Nefyodov, in response to a request from the Association of Ukrainian Cities, signed a letter from the Ministry of Economic Development that criticized the draft law №4030a using the tobacco industry-driven arguments[15].

Representatives of the tobacco industry not only acted through their agents in the government authorities but also openly opposed the adoption of the draft law. So, among those who in their interviews and publications distributed false and manipulative information about cigarette displays, there were the Ukrtyutyun[16] Director-General Valentyna Khomenko[17], Corporate Affairs Director at Philip Morris Ukraine Natalia Bondarenko (an interview on the business.ua site[18]) and Corporate Affairs and Communications Director at JTI Gintautas Dirgela[19]. British American Tobacco Ukraine[20] and Imperial Tobacco[21] also made statements against the ban on cigarette displays.

Pseudo-research was used to protect the position of tobacco lobbyists. Thus, at the round table the Ukrainian Institute for the Future held in May 2018, Chairman of the Board of the Institute for Economic Research and Policy Consulting Igor Burakovsky and NORT President Yurii Bondarev opposed the cigarette display ban, maintaining their position with the research results their organizations had obtained[22].

However, the main reason why the draft law was not adopted was the actions of the tobacco lobbyists among People’s Deputies of the 8th convocation: Olena Masorina, Vasyl Petyovka and Nina Yuzhanina. At the Conciliation Council of the Verkhovna Rada, former chairperson of the Committee on Taxation Nina Yuzhanina opposed to putting the draft law on the agenda, despite the fact that the main committee of this draft law is the Committee on Public Health and it did not relate to taxes in any way. N.Yuzhanina also demanded, avoiding ordinary practice, to consider the draft law №4030a along with her draft law №2430-d[24], misrepresenting the facts in her arguments. On May 14, 2019, N. Yuzhanina openly opposed the draft law №4030a during its consideration in the first reading[25].

Accordingly, a wide range of measures has been taken to prevent the legal ban on cigarette displays, which involve children and young people in smoking, so as not to lose profits from smokers who are dying or quitting. Among such measures, inter alia, there are the following: an information campaign aimed at influencing public opinion and decision-makers; interaction with government agencies both through formal requests and through informal arrangements to support the tobacco lobby; attempts to discredit supporters of the display prohibition; involvement of think tanks, media and MPs in activities of the lobby. Meanwhile, the tobacco lobbyists quite often use so-called tactics of “parodying” anti-tobacco activists when actions of these activists are distorted. For example, the tobacco lobbyists in the Parliament have traditionally submitted alternative draft laws, the norms of which neutralize the ideas of main anti-tobacco drafts, as we can see it in the case of the draft law №4030a.

[1] Ukrainian Center forTobacco Control. TWO YEARS WITHOUT CIGARETTE ADVERTISEMENT: HOW THE LAW AND NEW FORMS OF PROMOTION OF TOBACCO PRODUCTS ARE EXECUTED. Accessed on 25 Sept. 2019. http://tobaccocontrol.org.ua/news/dva-roki-biez-rieklami-sigariet-iak-vikonuiet-sia-zakon-ta-novi-formi-prosuvannia-tiutiunovoyi-produktsiyi

[4] Kyiv School of Economics. Study of the Economics and Features of Tobacco Marketing at Temporary Buildings of Kyiv 2017. Accessed on 25 Sept. 2019. https://www.slideshare.net/KyivSchoolofEconomics/ss-72853291

[5] US National Library of Medicine National Institutes of Health. Search database. The effect of retail cigarette pack displays on an impulse purchase. Accessed on 25 Sept. 2019. https://www.ncbi.nlm.nih.gov/pubmed/18042190

[7] All-Ukrainian study “Thoughts and Views of the Population of Ukraine (Omnibus)” was conducted by the Kyiv International Institute of Sociology in February 2019. Accessed on 25 Sept. 2019. https://cutt.ly/uw8024R

[12] Reanimation Package of Reform. The RPR calls on the Verkhovna Rada to support the anti-tobacco draft law No. 4030a in the first reading. Accessed on 25 Sept. 2019. https://rpr.org.ua/news/rpr-zaklykaje-verhovnu-radu-pidtrymaty-u-pershomu-chytanni-antytyutyunovyj-zakonoproekt-4030a/

[13] Business.Censor.net. Andrii Bondarenko. Why MPs will not ban cigarette display on the counters. Accessed on 25 Sept. 2019. https://biz.censor.net.ua/resonance/3100298/pochemu_deputaty_ne_zapretyat_vykladku_sigaret_na_prilavkah

[15] Association of Ukrainian Cities. Letter of the Ministry of Economic Development of Ukraine signed by Maksym Nefedov. Accessed on 25 Sept. 2019. https://www.auc.org.ua/sites/default/files/skan-kopiya_lysta_mert_po_zp_4030a_ta_4030a-1_vid_06.10.2016.pdf?fbclid=IwAR0MIepIekU9d26kHIQfKVF5w5hc6XDUjLNKozBRz7rFu2zqFKqeZ20YqWw

[17] Ukrainian news. Oleksandr Mazur. General Director of the Ukrtyutun Association Valentyn Khomenko: draft laws on the tobacco industry are registered by specific dates in order to receive valid grants and presence in the media space. Accessed on 25 Sept. 2019. https://ukranews.com/interview/1761-valentyna-khomenko-zakonoproekty-po-tabachnoy-otrasly-regystryruyutsya-k-opredelennym-datam-dlya

[18] Business Magazine. “We see our future in innovation related to the creation of alternatives to cigarettes.” Accessed on 25 Sept. 2019. https://business.ua/business/2734-svoe-majbutne-mi-vbachaemo-v-innovatsiyakh-pov-yazanikh-zi-stvorennyam-alternativ-sigaretam

[21] Imperial Tobacco. Imperial Tobacco is against the ban of the product display and the introduction of the specialized tobacco trade. Accessed on 25 Sept. 2019. http://imperial-tobacco.com.ua/press/news/imperial_tobacco_position_on_banning_merchandise_display_and_introducing_a_specialized_trade_of_tobacco_products/

[23] STOPCOR. Tobacco warfare: How to fight with smoking turns into a corruption scheme. Accessed on 25 Sept. 2019. https://stopcor.org/tyutyunovi-viyni-yak-borotba-z-palinnyam-peretvoryuyetsya-v-koruptsiynu-shemu/